Recently, my thoughts have been on arrows.  In particular, they have been on carbon arrows.  I have so far tested three types; some time ago I wrote an article here comparing my Easton Apollos and my Easton PoweFlights.  At the Grunwald competition I took delivery of a dozen new shafts supplied by Emil Eriksson: the Viking Series Sleipners.

First, I shall declare an interest.  Emil is an old friend for whom I have immense respect and liking.  Plus he’s arranging to provide me with some excellent Finnish black vodka at our next competition – long story.  That said, I do not intend to let these factors affect my review and if I do then I shall say so.

First thing’s first: the look and feel of these arrows is lovely.  They are a silky smooth carbon, without the slight abrasiveness of some carbon shafts.  The ones I have are decorated with a Viking broadsword, but I understand that in future they will bear the logo of Sleipner (I’m sure I don’t need to tell you, my erudite readers, that Sleipner was the 8-legged horse of Odin in Norse mythology.  And before anybody complains about the spelling, “Sleipnir” is the more common English rendering of the name but “Sleipner” is the Swedish version).  Both logos are pretty cool.

Weight: the arrows were cut to an AMO length of 29.5” (AMO measurement for arrows is the distance from the throat of the nock (i.e. the point of contact with the string) to the end of the shaft where the point emerges).  They come with inserts, 100 grain points (that’s what I chose but you can order higher or lower) and nocks and thus equipped they weighed 312 grains.  This weight was uniform across all the shafts (which is what you’d hope for but sadly not always what you find).  Once fletched with 3” parabolic feathers the mass was 321 grains +/-1 grain (being the variation in the mass of the feathers and fletching tape – it is essentially negligible).  By way of comparison, my Easton PowerFlights, cut to the same length and with the same fittings, weighed 351gns, making them 30gns heavier than the Sleipners.  The reason I weighed them already fletched, by the way, was that I was at a competition and had therefore fletched most of them straight away so that I could use them.

My preference is for a nock that fits the string relatively tightly.  Those supplied were too loose on my string for my liking (although probably about what most horseback archers prefer).  I therefore swapped them for the Easton nocks that I use in my PowerFlights.  This caused some minor (probably superficial) cracks in the carbon.  A dab of superglue fixed this with no further issues.  I am checking the internal diameters of the shafts to see whether the apparent difference is deliberate or not.

And so to flight.  The Sleipners fly beautifully.  Sometimes you shoot an arrow and just get a feeling that it is right.  So it was with the Sleipners.  This is hardly a scientific approach but it’s worth something in a sport like ours and in my defence I will add that I am not the only person to have come to this conclusion.  I know of at least one other person who shot a few arrows and immediately announced his intention to buy some.

This afternoon I tested the arrows through the chronograph.  I shot Sleipners and Powerflights, all fitted with the same nocks and points.  I shot two groups of five of each type of arrow, so the average figures quoted are the mean speed of ten arrows shot in two groups of five (excluding a few arrows that came up as errors).  I shot one group of Sleipners first, then the Powerflights, then the Powerflights again and finally the Sleipners again.  I tried my best to keep a consistent draw and while this is not usually my strongpoint, I am encouraged that the difference between highest and lowest speeds in each group was no more than about 5fps.  The only exception was a single PowerFlight that was significantly faster than the rest of the group.  Since this raises the average speed of the PowerFlights, it does not favour the Sleipners, which was my main concern: I was actively trying to avoid unconscious bias towards the new arrows.

The results were startling: the PowerFlights averaged 178.25 fps (the two groups averaging within 3fps of each other, suggesting good consistency).

The Sleipners averaged 193.11 fps.  The consistency wasn’t so good here: the first group were all within 5fps of each other but the second group contained three errors and the two results it gave an average of 186.19 fps.  This is still significantly faster than the Powerflights, but is worryingly lower than the other results for the Sleipners.  I suspect that the lower result is due to a change in the light conditions at about that time.  As a matter of fairness, however, I have included those two scores in the overall average speed of the Sleipners: the first, consistent group gave an average speed of 195.87 fps!

As a matter of curiosity, I also tested my Easton Apollos at the end: a single group of 8 arrows gave an average speed of 171.95 fps (with just under 6 fps between fastest and slowest, the light having steadied again).

I personally intend to buy a load more of these arrows and use them as my main arrow.  I thoroughly recommend giving them a go.  To get some, speak to Emil Eriksson on Facebook or message me and I’ll put you in touch.

A week ago I got back from the first stage of the European Grand Prix in Grunwald, Poland.  The whole time I was there I kept thinking “I must update the blog”.  And then I’d either fall asleep or be handed some Soplica (Polish hazelnut vodka), which I would drink until I fell asleep.  So here, somewhat later than anticipated, is the first part of my review of the week.

I actually flew to Poland knowing that there was no space for me in the competition but intending to watch and support.  More importantly, however, I was going for 4 days’ training under the watchful eye of Michal Choczaj of AMM Archery.  This would be the first formal coaching I had received in this sport since I first took it up some 5 years ago.  That time it consisted of a quick demonstration of the thumb draw and a few riding lessons.

The program for the training days was intense: a relatively civilised start time of 10am led on to 2 hours of ground archery training, followed by a half-hour break and a further 2 hours of horseback work (including Ana Sokolska’s rather gleeful insistence that we take our feet out of the stirrups and use our thigh muscles to “stand up”.  For somebody who rides as rarely as I do, that gets old really quickly.  Lunch was served at the beautiful house where we were staying, followed by a repeat of the morning’s program in the afternoon, often not finishing until after 8pm, at which point a collection of knackered horseback archers would collapse back in the house, eat dinner and sit back to enjoy the roaring fire and the free-flowing alcohol.

Speaking personally, I learned a huge amount in those few days.  My riding in particular is much better now than it used to be (for which a fair amount of thanks must also go to Simon Harding and to Oisin Curtis, the BHAA’s Development Officer, who is also a riding and horseback archery instructor at Old Mill Stables in St Ives.  I have always known that I hunch over my bow more than I like but by the end of the training week I was sitting noticeably straighter, drawing further and was generally more relaxed. 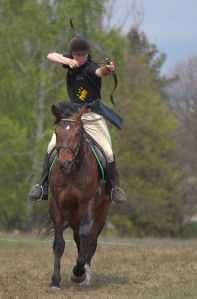 The pivoting wooden horse is a fantastic training aid.

I heartily recommend AMM training courses to anybody hoping to improve their horseback archery.  Closer to home, I also recommend Oisin’s lessons.

And so to the competition.  Those who read this blog last year will be familiar with the Grand Prix, in which GB took silver last year.  This year the competition has expanded with the addition of France, Germany and Hungary bringing the number of teams to 7 (although Finland were unable to field a side this week).  To accommodate these numbers, the teams have been reduced from 4 to 3 people.  Otherwise the concept remains broadly similar: 3 stages spread throughout the year; 3 events per stage (Korean, Hungarian and another chosen by the host nation) and points scored for your placing as a team within each event.

On the eve of the competition I was informed that there was a space for me after all, riding Irys, my war pony from last year.  I would not be in the Grand Prix team (since we already had a full team) but I would get to ride.  Given that the third event was to be a combination Grunwald Battle and Polish event, getting to ride was a big plus – it’s one of the most fun events out there.

As to how the competition went, I’ll deal with that in my next post.