It seems like a matter of only a few weeks since we left Korea but suddenly it seems that five months have gone by and I haven’t so much as touched a horse, much less shot off the back of one.  Time to get back in the saddle!

The international calendar is pretty busy this year.  Our first event is the European Grand Prix Series.  This event, the idea of my friend Emil Eriksson, involves four countries (Sweden, Poland, Finland and Britain) competing over three stages (Poland, Sweden and Britain) spread from April to September.  Each country will send a team of four competitors to each event and points will be awarded for where each competitor places in each event.  At the end of the season those points will be added together to determine the placings.  This is a test event for an event that we hope to see spread over the next few years.  It marks the next step along the road to horseback archery as a team sport, with nations competing as true teams rather than just a group of individuals from a single country.

One of the early steps along that road (and the one that gave Emil the idea for this series) was the BHAA International Series, which started last year when we hosted Sweden for a match.  A different country will be visiting this year and we could not be happier about it.  More news to follow!

As well as these team events I hope to travel to the Kassai World Cup in July and to EOCHA, which I have missed for too long now.  We also have our National Championships, a BHAA Regional Championships and the successful IHAA Postal Internationals.  Add in a healthy dose of gradings and the season is looking truly hectic.

There is one more event I want to mention as well: in August of this year the Blair Castle Horse Trials will be hosting a display by their chosen charity, HorseBack UK.  These fantastic people run courses for servicemen and women who have suffered terrible physical or psychological injuries, introducing them to horses, teaching them country skills and encouraging and helping them in so may ways, quite apart from providing them with a spell in one of the most peaceful places I have ever been.  Claire and I spent a few days there teaching horseback archery last year and were quite blown away.  The display is going to be awesome and hopefully raise a lot of money and awareness for one of the finest causes I know.

Coming in the nest few posts: a bit of instructional stuff on drawing the bow, maybe something on making arrows and definitely an article on the Border Ghillie Dhu, the bow that I have entirely fallen in love with over the last year and that is now in full production.

Now when can I go riding…? 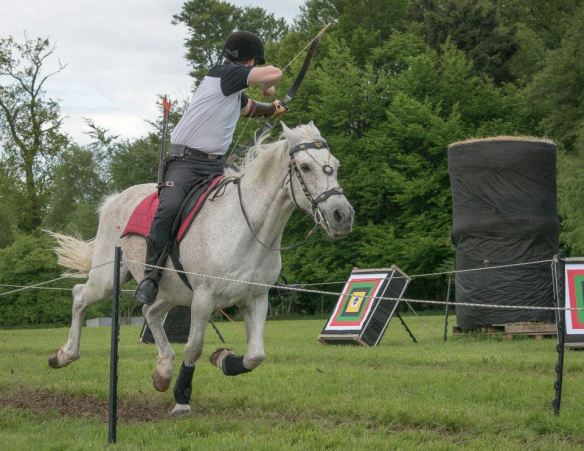